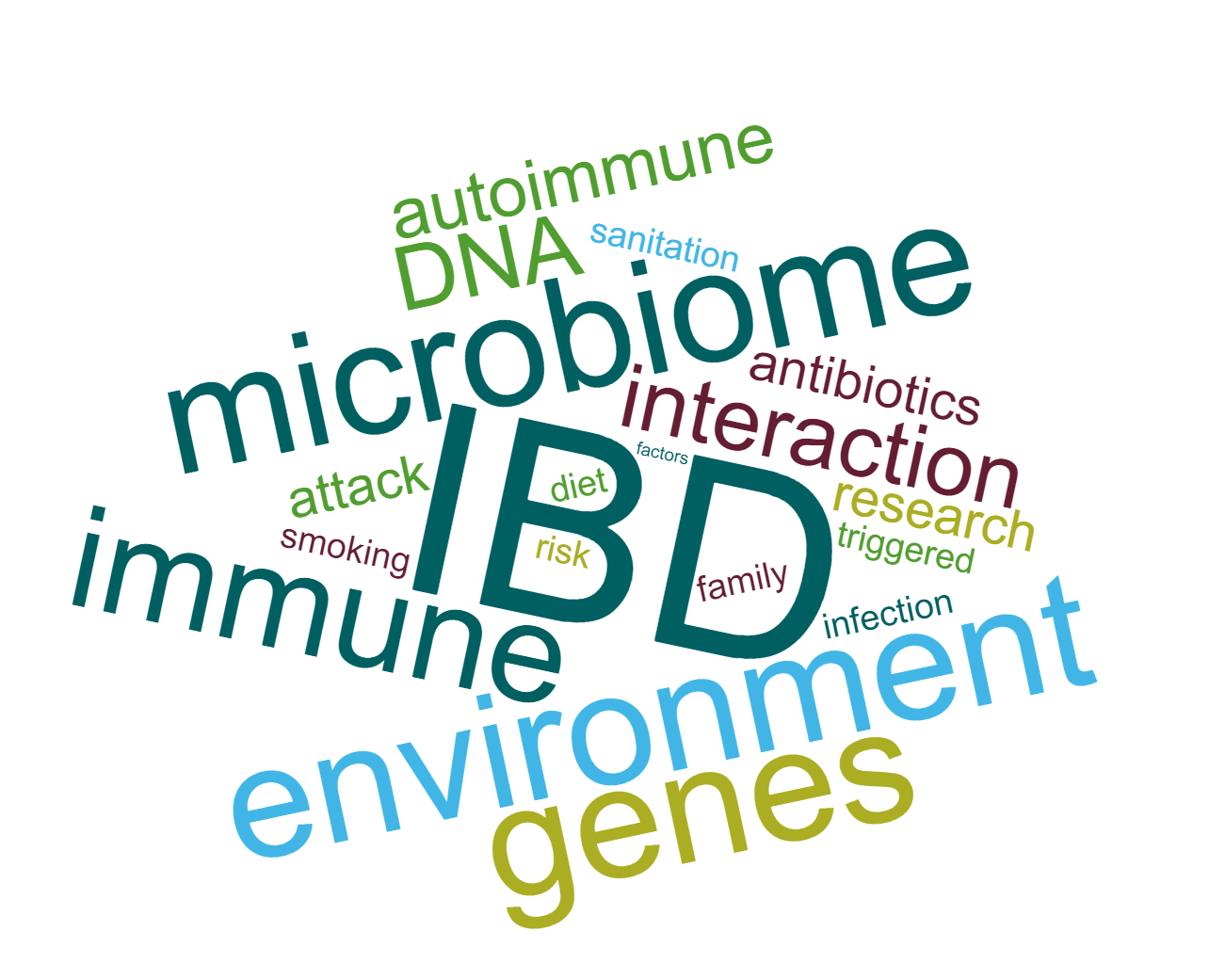 While the exact cause of IBD is not known, it is believed to be brought on by an interaction between your genes, gut bacteria (microbiome), the environment and your immune system. Scientists have identified >160 points in human DNA that can have genes which increase your likelihood of getting IBD. Some of these are associated with Crohn’s disease, others are linked to UC, but the majority of them are linked to both diseases. However, having a genetic predisposition is not enough. The environment also plays an important role in IBD. If a person who is genetically predisposed is exposed to these environmental factors, these genes can be triggered and the immune system can start attacking its own GI tract. Environmental factors that have been proposed are smoking, diet, sanitation, the use of antibiotics, and even an infectious gastroenteritis. There is ongoing research to figure out exactly how this happens. IBD is not contagious, however due to your shared environment and genetics with your family, your parents, siblings and children have an increased risk of also having IBD.

What is going on in my body?

The inflammation in IBD is signaled to occur via an imbalance or trigger in your immune system that causes immune cells (white blood cells) to attack your GI tract lining – this is why it is considered an autoimmune disease (your body is recognizing your intestine as foreign and reacting to it). The immune cells also release pro-inflammatory cytokines (eg. TNF-alpha). Cytokines are little proteins that tell other cells what to do – and, in this case, it tells them to be inflamed, which causes damage and prevents healing. This is why many IBD medications target the cytokines, or the receptors on other cells that allow white blood cells to invade the tissue. Because both of these diseases involve an increased inflammatory response in your body, the inflammation can travel to other organs or systems.

Symptoms of diarrhea and pain are common in IBD because the wall of the intestine is being damaged and this disrupts your digestion and can cause swelling and irritation. People may start to lose weight if they cannot eat normally and are having many bowel movements per day. Fatigue is also common, because not only is it tiring to be in pain and have to go to the washroom frequently, but the ongoing inflammation is physically demanding on your body.

Specific information about Crohn’s disease and ulcerative colitis is described below.

In Crohn’s Disease, your immune system is upregulated and can cause inflammation to occur anywhere along your GI tract, from your gums to your bum. Crohn’s disease tends to have “skip lesions” – where several parts of your intestine may be affected but the intestine in between is normal. If you do not know which part of your intestine is affected, ask your gastroenterologist. The inflammation in Crohn’s disease can affect all of the layers of the GI tract wall (we call this transmural disease), which is why you may develop stricturing or penetrating (abscess or fistula) disease. It is currently estimated that approximately half of patients with Crohn’s disease will develop a complication, like a fistula or stricture, within 20 years of their diagnosis.

What is stricturing disease?

Strictures of the intestine can cause symptoms of intermittent abdominal pain, bloating, or even bowel obstruction – this can lead to nausea and vomiting. If you have symptoms that suggest you have a stricture and are unable to keep food down, you should seek medical attention right away. 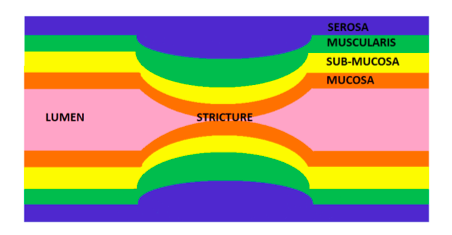 What is penetrating disease?

Penetrating disease is when the disease penetrates through the layers of the intestine to create either a fistula (passage between the lumen of the bowel and another surface), or an abscess (collection of pus) or a phlegmon (an inflammatory mass, that may or may not have an abscess with it). A large abscess requires drainage along with treatment with antibiotics. If the abscess is small, we treat it with antibiotics (plus, other treatments for your Crohn’s disease).

Fistulas (or passage ways) are tracts between the intestine and another surface and they are named by the two surfaces they connect. For example, fistulas that extend from the small bowel, start with the prefix “entero-” and fistulas from the large intestine start with the prefix “colo-”. The common types that are seen in Crohn’s disease are: between the intestine (e.g. entero-enteral, enterocolonic), to the skin (-cutaneous), bladder (-vesicular), and vagina (enterovaginal). Perianal fistulas are a special type of fistula to the skin around your anus. See IBD Procedures, Imaging & Surgeries for information on how this is treated. 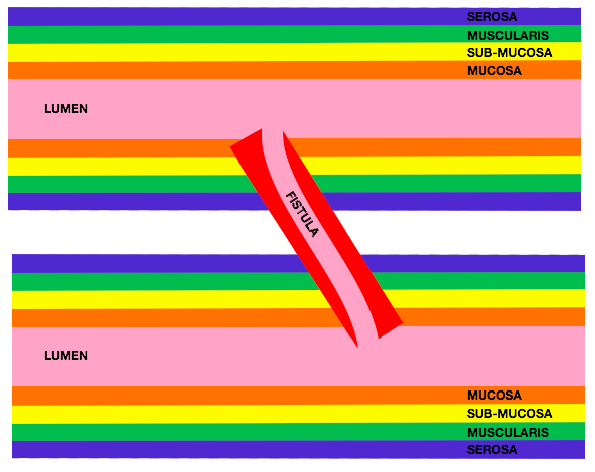 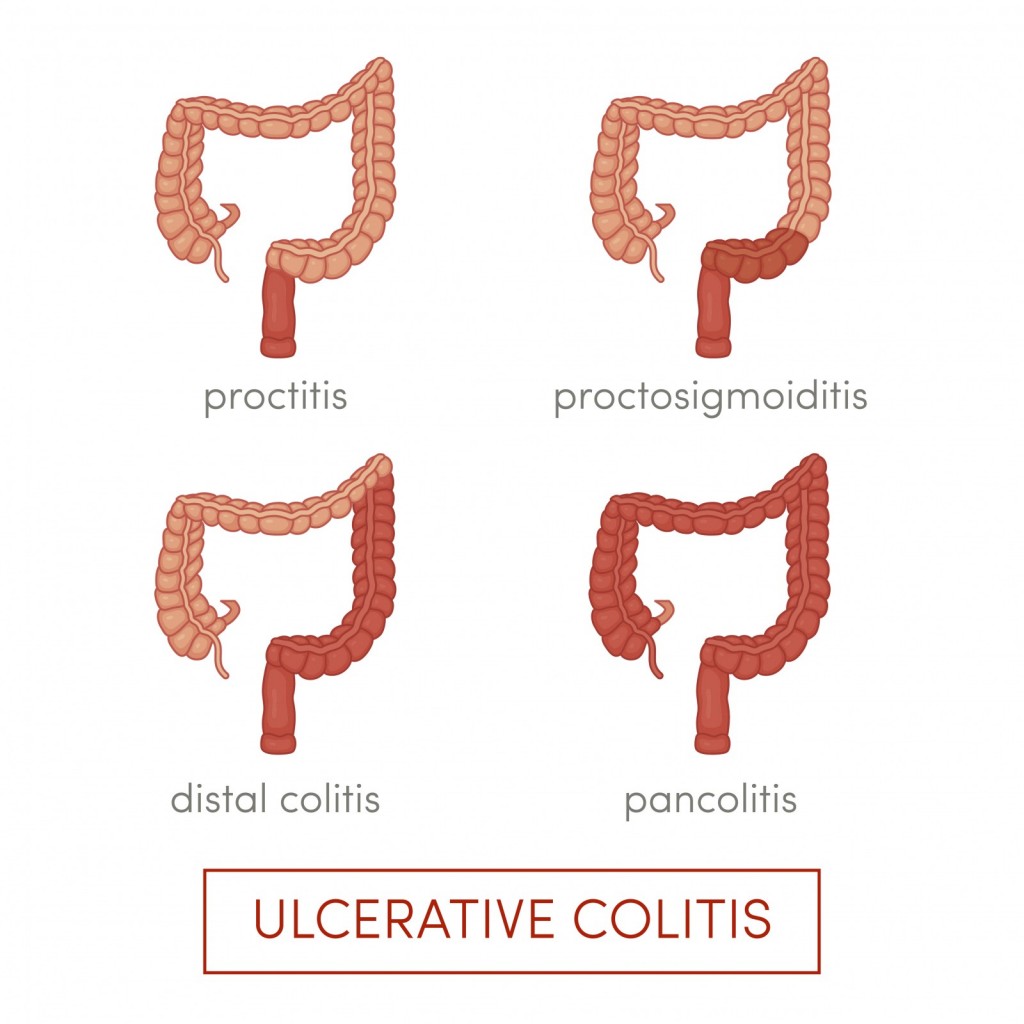 If you develop symptoms of active IBD, like abdominal pain, diarrhea, rectal bleeding, you may be experiencing a flare. You should seek medical attention – call your family doctor’s office and make an urgent appointment or call your gastroenterologist’s office and talk to the IBD nurse or make an urgent appointment. It is important to determine if your symptoms are related to a flare of your IBD or are due to other factors – e.g. antibiotics, irritable bowel syndrome, etc.

Flares can happen for a variety of reasons, and can differ from person to person. Common causes of flares are:

It would be helpful for you to take note of events (changes in medications, contact with another person that is sick, etc) that preceded a flare so you can figure out over time what the triggers might be for you.

Prognosis: Life expectancy for people with IBD is similar to that of people who do not have IBD; however, IBD is associated with some complications that may increase risk of death. Other complications of IBD may affect your quality of life (also called morbidity). In addition, medications for IBD may lead to complications.

Anatomy of the GI tract 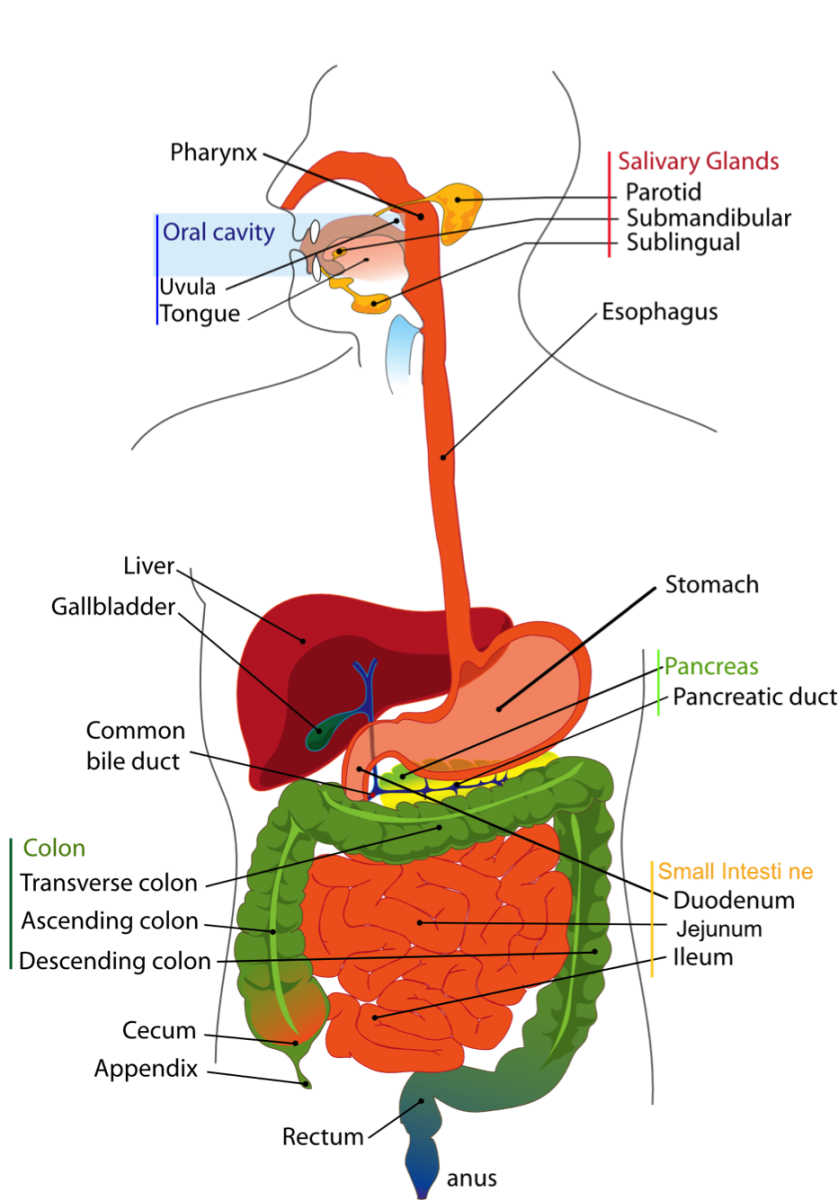 The gastrointestinal (GI) tract is made up of (in order):

There are several solid organs that are part of the GI tract:

Endoscopy is performed to diagnose and monitor disease – a camera on the end of a flexible tube is extended into your body through an orifice (entrance to the body). Endo means inside, which makes sense because the purpose is to see the inside of you. The main types of endoscopy used in gastroenterology are described below. Depending on your disease type/location, you may have had one or all of these types. 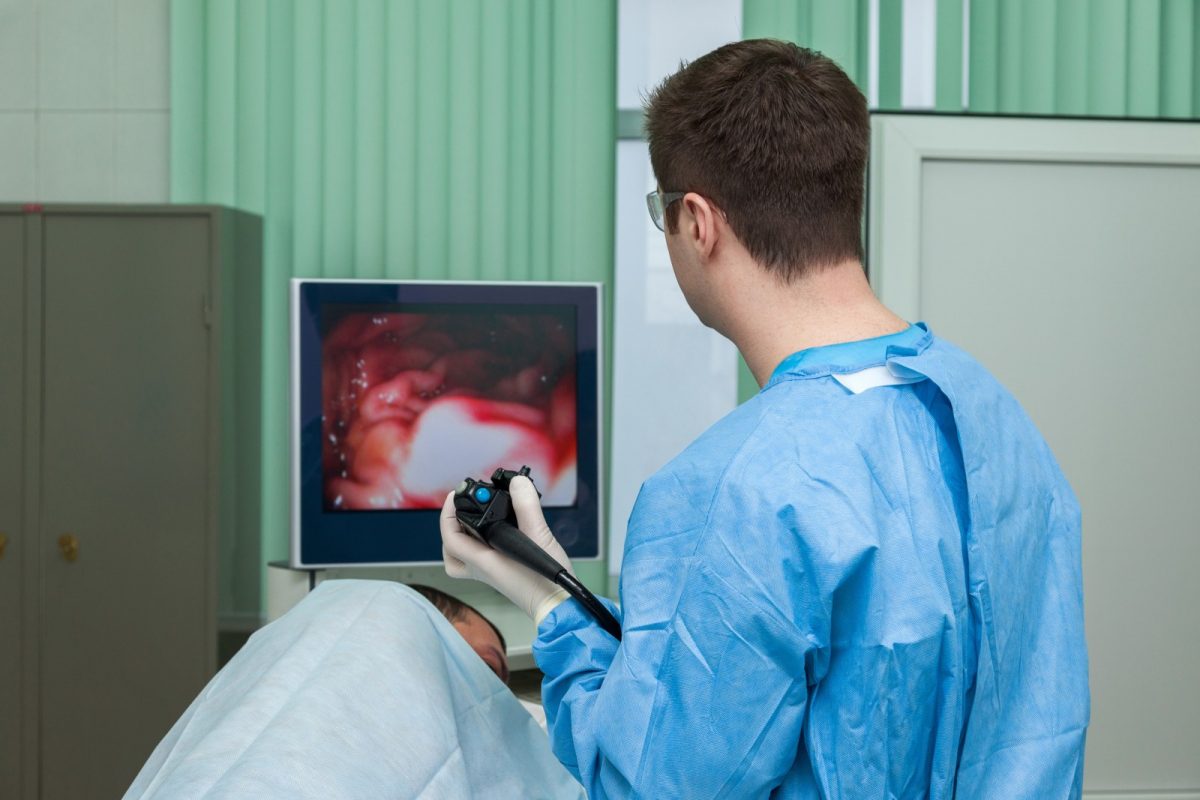 Preparation: You will be given instructions on how to prepare for the procedure – read them carefully. Preparation for a colonoscopy includes 3 parts:

Procedure: When you arrive at the hospital or endoscopy centre, you will be asked to change into a gown and an IV will be started. You are usually sedated for these procedures, with medications called “conscious sedation”. The common medications used for this type of sedation include: midazolam, fentanyl, and propofol. The purpose of the sedation is to keep you comfortable during the procedure and allow you to recover quickly after the procedure. During the scope, they may take samples of your tissue so the gastroenterologist can send it to be analyzed – these are usually very small pieces.

Post-procedure: You need to be accompanied home from the procedure, if you have been sedated. You are not allowed to drive or operate heavy machinery until the next day. Some people might experience excess gas after the procedure – walking often helps you to pass this.

Various types of medical imaging might be necessary during your lifetime. These pictures are necessary to assess disease extent/severity or the location of a stricture. Most often, you will either be requested to go for a CT Enterography or an MR Enterography. An enterography is a scan that is designed to look at the intestine – you will be asked to drink a solution right before the test to distend the lumen and you will receive contrast through an IV. An enterography can be done with either an MRI scanner or a CT scanner.

Surgery is sometimes used in the treatment of IBD. It is often reserved for occasions when other medical therapies have failed, but it really depends on your specific circumstance and personal preferences.

The types of surgeries in ulcerative colitis include:

The types of surgeries in Crohn’s disease include:

The treatment of perianal fistulas usually involves an operation called: Examination under anaesthesia (EUA). At an EUA, the colorectal surgeon may do one of the following procedures to treat your fistula.

It is clear that not one diet works for everyone with IBD, so it is important to know your triggers, meet with a dietitian and eat what makes you feel good/keeps you healthy.

While you may have a sensitivity or not respond well to some foods, it is not ideal to eliminate entire food groups without consulting a dietitian or healthcare practitioner because you could develop vitamin or nutrient deficiencies. It is important to have a healthy diet because in some cases you already may not be absorbing all of the nutrients from your food, due to inflammation, irreversible damage or a surgery. Even if you have a very healthy diet, you might still need to supplement.

A consultation with a dietitian (who can be recommended by your gastroenterologist) will provide customized information on what you need to improve or include in your diet and how to avoid the things that don’t agree with your digestive system. At first, the dietitian will likely have you keep track of what you eat in food diaries so he/she can see what you might be missing.

Your gastroenterologist or potentially your family physician will likely be checking your blood for deficiencies in vitamin D and iron. While you may be able to improve your levels with diet, some deficiencies might require injection or infusion of large doses to replenish your stores.

If you have a stricture that causes symptoms (abdominal pain, bloating, vomiting), gastroenterologists will usually recommend that you are on a “low residue diet” – this is similar to a low fibre diet – avoiding seeds, the skin of many fruits and vegetables, and uncooked vegetables. Ask your gastroenterologist or dietitian if this is right for you.